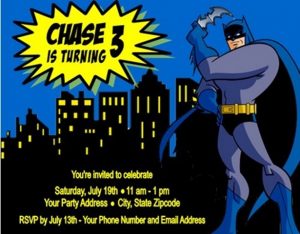 Batman is universally one of the most popular super heroes, and this remains true for young children. When children want to make an impact on their birthday and host a Batman-themed party, the invitation is the first step toward success. Batman has so many elements that the invitation can vary into multiple styles; ultimately, the style you choose will create great keepsakes for birthday memories.

Create invitations based off of Batman’s most recognizable symbol: the bat. Choose either the new sleek “Dark Knight” design or the classic bat symbol. Cut out the invitations using the symbol of choice for the design; you can use two cut-outs for an invitation that opens or one cut-out symbol with the party information on the back.

Create an invitation that children can use. Use black construction paper to meld a simple Batman mask, or purchase cheap replica masks at a party store. Attach the information to the back of the mask using string so it can easily be removed without damaging the mask.

The Riddler is one of Batman’s most popular villains, and a riddle-themed invitation will add intrigue to the party. Use bright green card stock for the most accurate invitations. Add some gold glitter glue question marks and the riddle itself. Get creative with the riddle and make something like this: “Riddle me this, Riddle me that, Guess which boy will wear a birthday hat?”

Help “guide” guests to your party with a custom bat signal invitation. Purchase cheap flashlights for as many guests as you’re inviting to the party. (Cheap flashlights are available at dollar stores and can easily be used for the project.) Cut out small bat shapes, using thick cardboard (like a cereal box), and tape them to the front of the flashlight. Tape a piece of paper with the party information around the handle of the flashlight.

Create an invitation that comes from Batman himself. Make the invitation by typing it and word it as an “Official Justice League Letter,” calling out to other superheroes. It can go something like this: “Calling all fellow heroes, Batman here, and I need your help defeating the evil-doers of Gotham City and celebrating Timmy’s Birthday. Don your mask and cape and head to 123 Street, where the crime fighting begins at 4 p.m. sharp.–The Dark Knight.”

Cut out card stock in the shape of a cityscape for a Gotham-themed invitation. Gotham is Batman’s hometown, and the invitation would invite guests to visit the fictional city. Add Batman touches among the invitation such as Batman himself, the Bat-signal and the Batmobile.
READ Batman Party ideas at https://birthdayinspire.com/batman-birthday-party-ideas/ 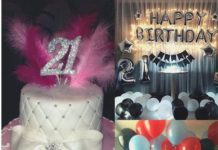